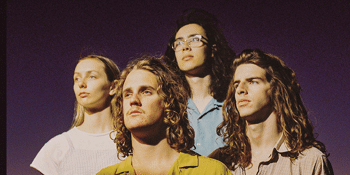 with Jess Day
NightQuarter - Sunshine Coast (Birtinya, QLD)
Friday, 4 June 2021 5:00 PM
41 days away
All Ages (minors must be accompanied by Guardian)
Rock
Indie
Alternative
Send this event to
THIS EVENT HAS BEEN RE-SCHEDULED AND CHANGED SUNSHINE COAST VENUES -  FROM SOLBAR TO NIGHTQUARTER
THE DATE HAS CHANGED FROM FRIDAY 23 APRIL TO FRIDAY 04 JUNE 2021
All existing tickets from the original show/s will be honored for the event.

It’s a brand new year and Spacey Jane are gearing up to make things a little brighter by taking their debut album Sunlight on a huge tour around Australia.

With numerous shows across the country planned, cancelled, rescheduled and cancelled again in 2020, the Fremantle four piece are keen to head East once more.
They’ve kicked off 2021 with a big bang, taking out the #2 spot in triple j’s Hottest 100 countdown with “Booster Seat”.

Three more tracks from Sunlight made the countdown, with “Weightless” at #81, “Straightfaced” at #28 and “Skin” placing #15 marking a momentous and celebratory day for the band.

Released in June last year, Sunlight reached #2 on the ARIA charts and was voted Album of the Year in the triple j Listener’s Poll.

The band are stoked to finally be taking the full album on a national tour:

“We're so excited to finally have the opportunity to play these songs on the road! It's been a long time since we've managed to tour Australia, and we're all rearing to go!
These will be our biggest shows to date, in venues we've only dreamed of playing - see you out there ”