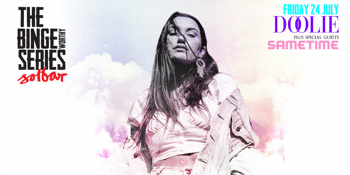 Since establishing her recording career at the age of 17, DOOLIE has proven to be a great songwriter, powerful performer, and an obvious talent with a bright future. The 2019 year saw her debut release on indie electronica label, etcetc with ‘2:20’ feat. Charlie Threads followed by standout single ‘Attention’ feat. China Roses which has since clocked up over 500,000 streams on Spotify. Both songs co-written with Melbourne producer GXNXVS (Lastlings, Banoffee, OKBADLANDS). DOOLIE backed up these strong releases with ‘No Game’, a song co-written with, and featuring Sydney producer XMPLA, each release seeing support from triple j and triple j Unearthed.

Lending her pitch-perfect vocals to local producer LO’99 for the dance anthem of the summer ‘Stay High’ is the most recent taste from DOOLIE. So far, the track has spent a week at #1 on the ARIA club charts and received spins from world-renowned international DJs including Tiesto, Martin Garrix, Fedde Le Grand and more. Penning deals with Poster Child touring and 120 Publishing show DOOLIE has no intention of slowing down and is only just getting started.

It’s been a solid 12 months for DOOLIE who has fronted a compelling catalogue of releases, which most recently put her in a finalist position for the 2020 Gold Coast Music Awards’ inaugural Gold Coast Music Prize, as well as the People’s Choice award. Her impressive live performance has further established her presence, seeing her take the stage at festivals like Splendour In The Grass, Falls Festival and Big Pineapple.

“I've talked about Doolie as a proponent of Australia's nu-pop movement… she's at the forefront of the vanguard, leading the pack with sword raised and draped in warpaint.” – Tommy Faith, triple j Unearthed

“She’s making pop that keeps you on the edge of your seat and her subtle vocal variations are super cool and intriguing.” – Declan Byrne, triple j Home and Hosed

“If you haven't heard of Doolie, you will very soon.” – Futuremag Music