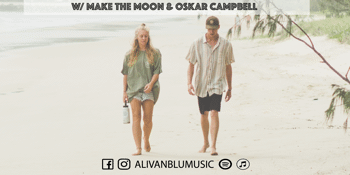 Alivan Blu is Australian Indie-folk duo Jed Billington and Anna Stanton from the Far North Coast of NSW, Australia. They first began their journey together as a couple, travelling and surfing up and down the East Coast of Australia along with many other countries around the world. They began writing songs in remote areas of Indonesia, India and the United Kingdom. Returning back to Australia and drawing from their experiences of travel and growing up with the ocean at their front door, they combine two acoustic guitars, blended with their complementary voices and warm harmonies to elicit a desire for warm summer nights by the ocean or an adventure into the wilderness.
After their first release 'Wild Eyes' at the end of 2019 the duo gained following and created momentum with their second release 'February'.
Throughout 2020 they released a series of singles solidifying themselves in the folk scene of Australia