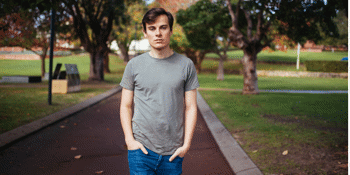 Solbar (Maroochydore, QLD)
Tuesday, 27 April 2021 6:00 pm
3 days away
18 Plus
Comedy
Comedy
Send this event to
Ever since I learned there was a propaganda model created in the early 1900s that filters all media
so the public only sees what the elite want them to see I have been obsessively tracking its
ramifications. It's truly horrific. There is no democracy. It's all a lie... can I have some money?
Jordan Shanks is a controversial political satirist and podcast creator. In 2019 he was threatened
with being sued by Clive Palmer, but he refuses to be silenced. In 2020, hit pieces by main stream
media have only strengthened his resolved to call out political corruption and media bias.
He has produced over 580 no-holds-barred videos for his YouTube channel, has over half a
million followers on social media and his videos have been viewed over 112 million times.
Jordan hopes he will foster some sort of interest in socio-political discourse, maybe even stir
positive change, but most people keep asking him to dress up as a high school kid he once knew.
Sometimes he complies.
Praise for Jordan
“A character-actor that rivals Daniel Day Lewis...Jordan somehow makes the audience give a sh*t
about politics again"...The Upside News, 4/5 Stars
"Being in a packed house of people pissing themselves – sometimes in anger – there was a
palpable sense that this feeling can be forged into something powerful. Like, I don’t know, a
metaphoric hammer, for example”…Daily Review