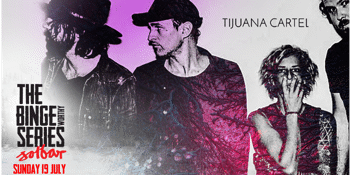 Tijuana cartel create a heady mix of multi-layered fat beats, touches of slide and flamenco guitar, trumpet, keyboards and vocals all propelled by Afro Cuban percussion. Mixed with rockier grooves, and some hardened electronica - it's a combo that is intriguing, energetic and utterly delicious!

Constant touring across Australia and abroad an enduring love affair with live gigs have imbibed TIJUANA CARTEL with a raw and electric energy.

What makes Tijuana Cartel so unique is their ability to beautifully combine elements of so many different musical origins, cultures and genres into one seamless, uplifting soundtrack.

Despite the obvious shades of world music blasting through the sound system Tijuana Cartel has been steadily working more towards a contemporary sound within the alternative and electronica scenes, managing to add its own deft touch to what is becoming a new era of globalised western music.

The band has toured relentlessly, playing many of Australia's finest venues and favourite festivals including Falls Festival, Southbound, Byron Bay Blues and Roots, Good Vibes, Pyramid Rock, Rainbow Serpent and Sunset sounds alongside an impressive list of private shows around the country and much of Asia.

After spending the entire month of March on the West coast of Australia thrilling hordes of new fans TIJUANA CARTEL are set to hit AJ Hacket Cairns before bunkering down to record their sophomore album.

With their latest single, 'White Dove', ringing in the ears of triple j listeners since December, and after selling out venues across a series of eight shows in Fremantle, Margaret River and Perth their show is a must see option.