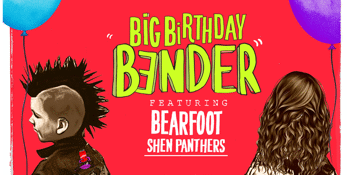 Shen Panthers
Solbar (Maroochydore, QLD)
Friday, 7 May 2021 7:00 pm
1 day away
18 Plus
Indie
Reggae
Rock
Funk
Send this event to
Solbar's Birthday Bender is commemorating the institution's 10 years on Ocean Street.  From seedy side street, to the home of enterntainment on the Sunshine Coast, Ocean Street and it's mega drawer 'Solbar' is at the hear of Sunny Coast Culture. To help us celebrate 10 years of beers, Bearfoot & Shen Panthers are bringing dem sticky reggae vibes on Friday 7th May (originally Sunday 4th April).

BEARFOOT
Bearfoot blends So-Cal, Hip Hop and dub reggae, with a dash of the Endless Summer soundtrack thrown in.  Chief songwriter and vocalist Asher Chapman merges his musical upbringing in the Islands of Vanuatu with inspiration from Jamaican/Pacific music. He strives to write songs of substance with a positive message. Smooth lyrics are filled with meaning and reflection of his life so far.

From humble beginnings, working hard and playing practically every weekend after the release of debut single, ‘Babylon’, Bearfoot ’s sound gained traction after the release of second and key single, ‘Impolite’ - produced by Paul Bromley at the Tanuki Lounge in Brisbane’s West End - grabbing the attention of Triple J’s Roots’n’All program, and scoring a Queensland Music Award in the process (Best Blues/Roots Release). Their debut EP, ‘TRiBE’ continued the momentum with singles, ‘Dreamer’ and ‘Could Be Worse’ all gaining radio play. As well as multiple headline East Coast Tours, expect this list to expand considerably into the new decade!

The bears went into hibernation {studio recording & Covid 19} for most of late 2019 into 2020 but will return strong, releasing new singles to support the highly anticipated debut full-length album due for release early next year. Bearfoot’s stance for a creative culture is solid... The future is looking bright for Bearfoot.

SHEN PANTHERS
Based in Coolum Beach, Sunshine Coast indie surf rockers Shen Panthers will be bringing their tidy mix of delicate, echoing rhythms blended with driving leads, punchy drums and bass to the Solbar for the 2nd time.The formation of the band during the pandemic gave the Shennies ample time for crafting a unique sound. The tail end of 2020 has seen the release of two singles to give the public a taste of what’s been cooking and an EP is also in the pipeline.

The Shen Panthers love to make tunes that people can get a little fruity to over a few cold beers, channeling coastal Australian indie rock with a few hefty teaspoons of their funk, blues and heavy rock influences adding spicy flavour to the mix.